E.M.E.N > News > Improving EU support to the integration of people with a migrant background

How can we improve the contribution of EU Funds to the integration of people with a migrant background? This was the topic of a workshop held on 8 October at the Brussels Convention Centre Gold Hall in the framework of the European Week of Regions and Cities 2019.

While many EU Members States have been receiving migrants for decades, people with migrant background still have far less access to education, health services or employment than resident citizens of indigenous origin. It is undeniable that the European Commission has been deploying a large number of resources, such as those included in the European Structural and Investment Funds (ESIF) the Asylum, Migration, and Integration Fund (AMIF), the EU programme for Employment and Social Innovation (EASI), or the Rights, Equality and Citizenship programme, to the improve conditions for the migrant population. Nonetheless, such economic efforts have not achieved their full potential.

Andor Urmos, Policy Officer at DG REGIO and moderator of the panel, highlighted the significant economic contribution at the EU level, as well as the willingness to create a better-coordinated framework to support Managing Authorities. A first step in that regard was the launching in January 2018 of a “Toolkit on the use of EU Funds for the integration of people with a migrant
background”, which will be further updated and relaunched in the first quarter of 2020.

Nevertheless, Pauliina Eskola, a ministerial advisor at the Finnish Ministry of the Interior, emphasised that it is up to the MMSS and not the European Commission to implement a comprehensive approach that ensures the different calls that aim to contribute to the integration of people with a migrant background are aligned, in response to being asked about the secret to the success of Finland’s coordination of EU funds. This requires an effort not only to prioritise integration policy but also to cooperate closely with all the actors working on the ground as well as the diaspora populations so that the voices of the migrants themselves are properly taken into account.

Jakob Weiss, a consultant at Metis in Austria, presented the recent results of the impact assessment study for the European Social Fund (ESF) and the Youth Employment Initiative (YEI) in supporting migrants until the end of 2017. The results concluded that at least 2.4 million migrants received support, 2.1 from ESF and 0.2 million under YEI. However, the actual benefits and concrete results are very difficult to quantify. Such difficulties stem from large differences in the targeting of migrants and the implementation of measures across the EU. Further research is needed to allow for more detailed insights.

From emergency measures to a long-term strategy on integration 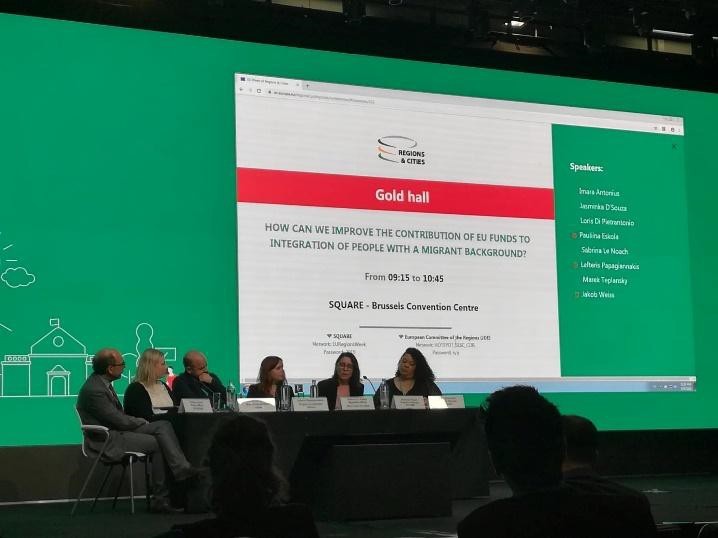 The migration crisis of 2015 revealed the lack of a strategy for tackling unforeseen societal challenges in a rapid manner, such as emergency measures for first reception and housing, and a plan for the socio-economic integration of newcomers from an early stage, avoiding their isolation for long periods, sometimes years, before their legal situation is clarified.

Lefteris Papagiannakis, a project coordinator from the Municipality of Athens, outlined how while Greece has transitioned from a sending and transition country to a host country, the measures applied at the national and local levels have not evolved accordingly to adapt to this new situation. Therefore, five years after the outbreak of the crisis, Greece continues to mainly provide immediate help to people who have fled conflict, but not long-term measures that could help newcomers fully integrate into society.

In this context, Imara Antonius, European funding strategy advisor for the City of Utrecht, explained how the city of Utrecht has implemented an Urban Innovation Action (UIA) project to work closely with the reception facilities, neighbourhood associations, public authorities and NGOs from the time of reception of the newcomers, without waiting for them to have the regular permission to stay. They could not use ESF funds, for instance, because that programme only addresses those who already have a regular situation, which she views as an important barrier to guaranteeing a successful integration.

Overall, the panel seemed to agree that migrant-led NGOs need further empowerment in order to be in a position to complement effectively local government initiatives. Technical assistance for national authorities to build not only their internal capacities but also those of their local actors is essential if we want to ensure the sustainability of the actions funded by the EU and carried out by small organisations working at the forefront that often struggle with the administrative burden associated with this type of funding.

Indeed, there is room for innovation, flexibility and the building of trust and understanding among stakeholders, as well as greater adaptation to the reality on the ground. A project-based approach focused on the aim of the proposed actions rather than on technicalities is also required. These are some of the bottom-up recommendations emerging from the local actors to tackle the challenges ahead.