The MAAVi Foundation aims to promote the integration and cohesion of migrants within local communities, providing children with comprehensive support that has sport and teamwork values at its centre.

On 19 February, AEIDL visited the facilities of the Kimitec Group, a group of companies whose mission is to create a different way of producing healthier food by offering innovative and natural agricultural solutions.

Kimitec Group is based in the southeast Spanish province of Almería, an area that since the 1980s has been home to the largest concentration of greenhouses in the world, covering more than 30,000 hectares. With a production of 3.5 million tonnes of fruits and vegetables annually, Almeria produces much of Europe’s fruits and vegetables.

The societal challenges in place

This rapid economic growth brought many opportunities but also the emergence of new social cohesion problems. The area has experienced large and rapid inflows of workers coming to work in the greenhouses and related industries from more than 150 countries. The sector demanded and still, today requires a large amount of foreign labour to fill gaps in the local market.

It is in this context that Kimitec wanted to make a difference by creating the MAAVI Foundation. Committed to its societal impact and the communities around it, the MAAVi Foundation aims to promote integration and cohesion within the community by supporting younger generations.

A core activity of the foundation is the MAAVi Football Club, which helps children aged 4 to 16, commonly the most vulnerable group, to integrate culturally and socially. The club was launched in 2019 with more than 200 girls and boys joining in its first year. It now has twice that number.

By using the world’s most popular team sport as an engagement tool, MAAVI Foundation wants to promote the idea of living in an integrated community that does not exclude anyone based on their country of origin, race, sex, language or social status. Children feel part of a supportive team, where everybody is essential. When the team scores, it does not matter where you are from. That moment brings to the surface common human values of respect, discipline, effort and teamwork, which transcend nationality and identity.

A comprehensive support programme for children and their parents

Of course, the main goal of MAAVI Foundation is not to generate successful football players. Its objective is to empower boys and girls to become responsible, respectful and confident individuals open to a future full of opportunities. Such encouragement goes beyond football training, especially for children that suffer from basic deprivations.

“We saw how some of the kids were not doing well at school because they have visual impairments and the parents could not afford to buy them a pair of glasses. We saw how they were too tired to perform well because they were getting enough to eat. Some had to walk long distances to participate in the football training because nobody in the family could give them a lift,” a representative of the MAAVI Foundation told AEIDL. The comprehensive ecosystem that MAAVI has created for them includes educational achievement (it is mandatory to have a good performance at school to continue playing with the team), the promotion of health, nutrition and hygiene, and employment services to boost the job prospects of the parents. 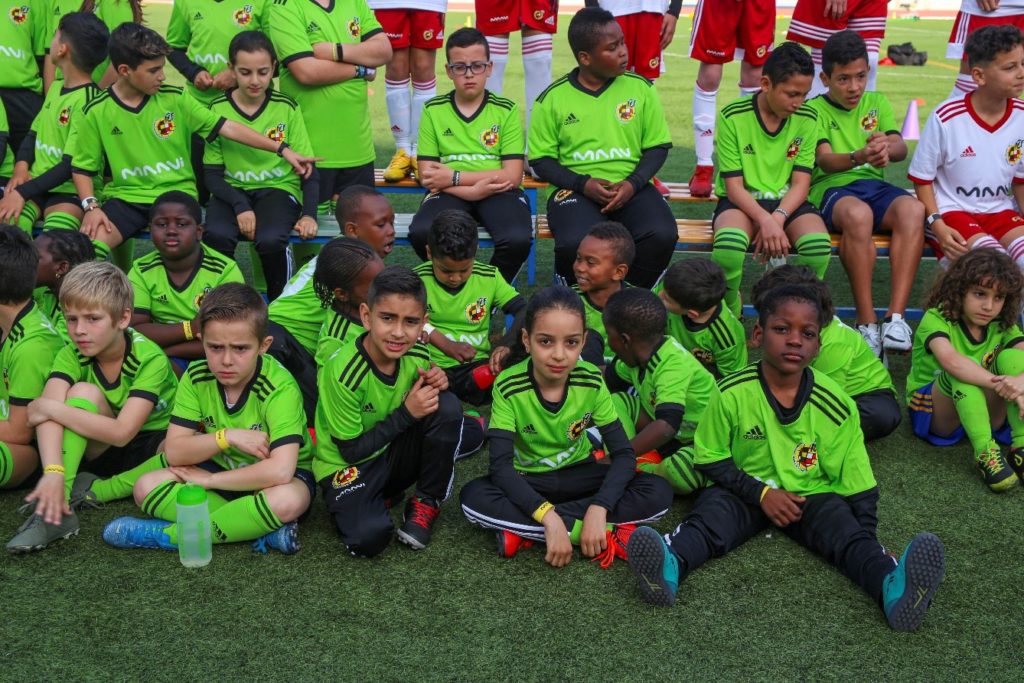 On 25 February, Luis Rubiales, the president of the Royal Spanish Football Federation (RFEF), visited the Antonio Peroles Municipal Stadium, home to the training facilities and school of MAAVI in Roquetas de Mar. The federation agreed to collaborate with the foundation over the next four years. With this partnership, the RFEF acknowledges and supports the huge work that has carried out by MAAVI Foundation in the surrounding community and especially those in need of extra support. 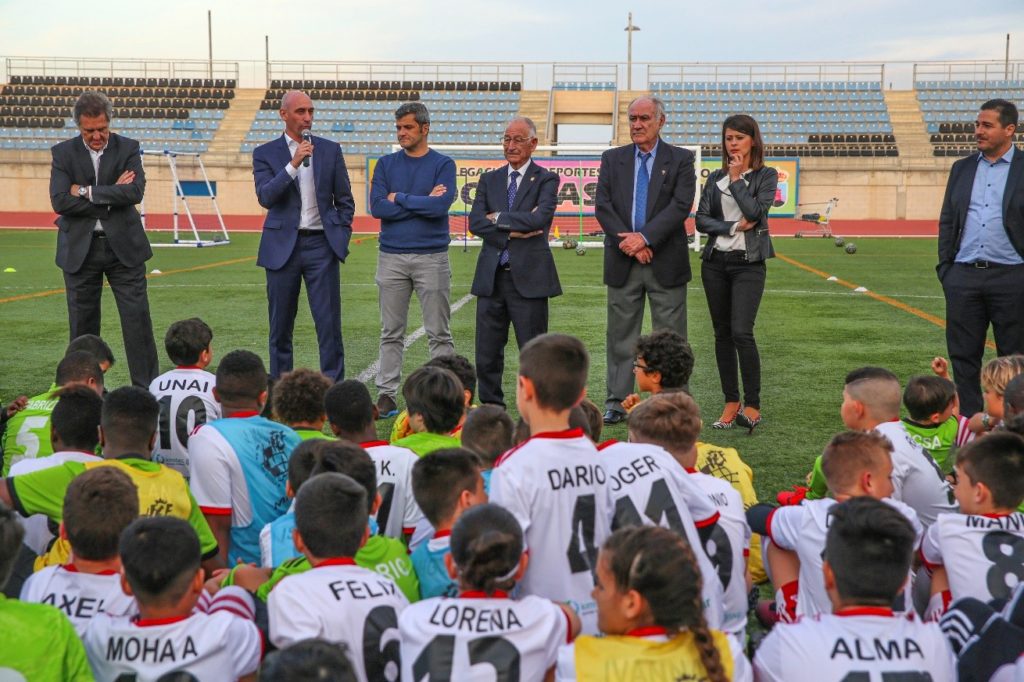 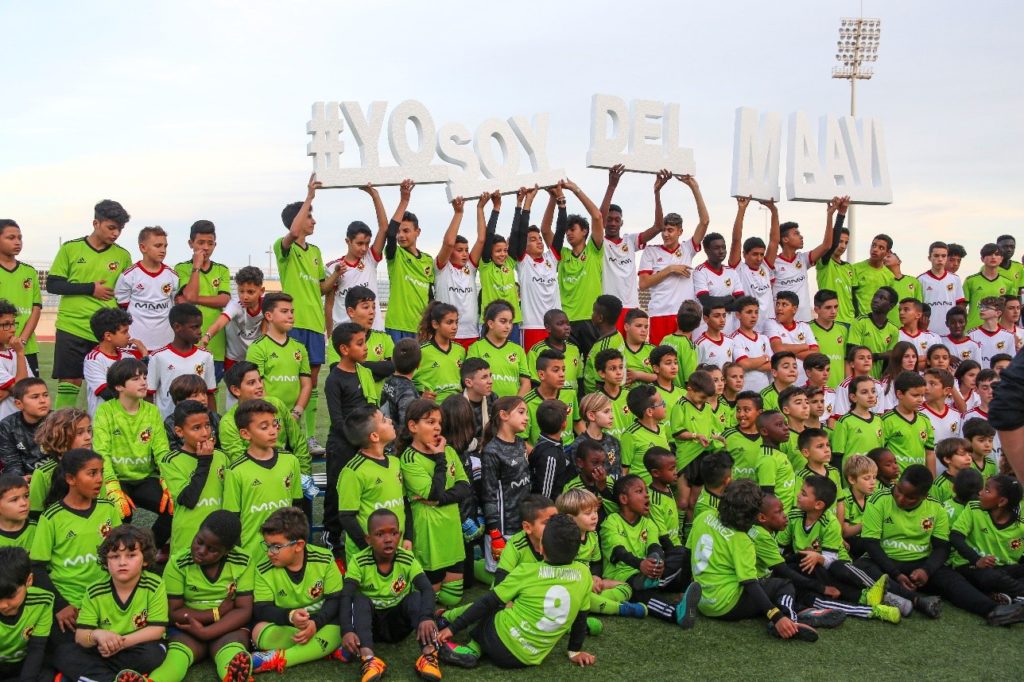 The president of the RFEF, Luis Rubiales, the head of the Maavi Foundation, Félix García, and the Major of Roquetas de Mar, Gabriel Amat, among others, addressing the kids of the MAAVI football club and the press during a public event

Our priority now is to make the club and school sustainable and open to all those who need it. Our vision is to scale up this model to other Spanish cities with a view to fostering cultural integration and social cohesion around the country

The vision does not end here. By 2021 MAAVI aims to have 250 kids enrolled in 30 teams and 750 children benefiting from the holistic support provided by the school. The foundation will offer financial and sports grants to half of all beneficiaries to ensure their successful involvement. The priority is to keep growing, providing support to all those who need it, and to make the MAAVI model, which relies on more than 200 volunteers, sustainable and replicable to other Spanish areas.

Video of the visit of Luis Rubiales to MAAVI Foundation.