Socioeconomic integration of migrants – challenges and opportunities for the local level

While two-thirds of third country nationals live in metropolitan areas in Europe, migration is not always an urban phenomenon. The settlement in one place or another can determine the way in which the newcomers access certain services and markets, and thus their further integration. This was the topic of two workshops held on the 8 and 10 October in the framework of the European Week of Regions and Cities 2019.

According to Claire Charbit, Head of Unit, Territorial Dialogues and Migration Centre for Entrepreneurship, SMEs, Regions and Cities at the OECD, the recent findings of the OECD publication ‘Working together for the local integration of migrants and refugees’ indicate that rural areas offer different advantages for the integration of people with migratory backgrounds from those of a city. Furthermore, for some rural areas, newcomers could be an answer to their increasingly ageing population that threatens the closure of existing public services. On the other hand, rural areas struggle more to match migrants and refugees skills with potential job opportunities due to the decreasing attractiveness of the job market in those smaller towns.

Professor of Politics Simone Baglioni at Glasgow Caledonian University – Glasgow School for Business and Society presented some of the key findings of the H2020 SIRIUS project, and emphasised that migrants face great challenges in integrating into their host countries’ labour markets in general. They suffer from higher unemployment rates, are more likely to be overqualified for the positions that do hold, and earn lower incomes than their native-born peers. The main barriers that the SIRIUS project identified can be divided into three main areas: policy and legal obstacles; social barriers such as xenophobia or lack of social networks; and individual difficulties such as lack of language and other skills, or access to basic information. 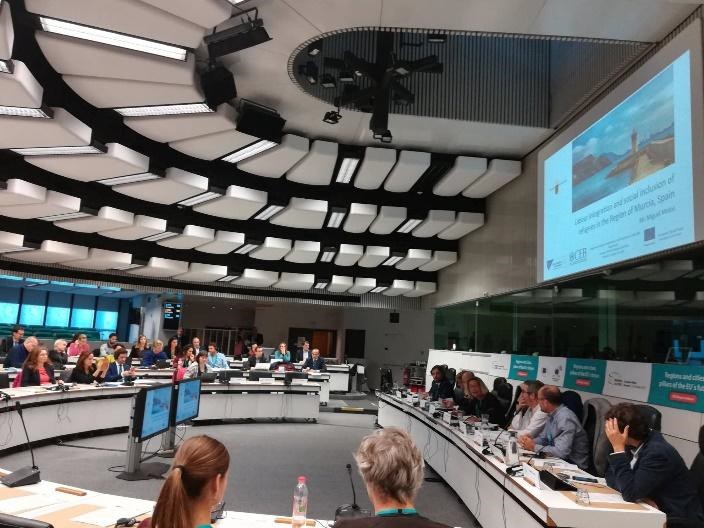 For this reason, pre-established ethnic/migrant communities tend to attract additional members with the offer of social networks and basic information about the services and regulations. And this also leads to other correlations; the more people live in a diverse area, the less likely the native population will be reluctant to host newcomers. Likewise, the higher the regional or local unemployment is, the more likely you will find opposition to host and integrate newcomers. For those particular findings, large urban areas would be more advantageous than rural ones.

In any case, several large and small to medium-size territories in Europe have implemented initiatives that aim to contribute to the sustainable integration of migrants and refugees. In many cases, these initiatives owe much to the prominent role played by mayors, according to Tomáš Boček, vice-governor of the Council of Europe Development Bank. Mayors can act as opinion leaders and become a concrete role model in the promotion of integration for their communities.

One example highlighted by the OCDE as a win-win case is the German city of Altena. With a population of 17,000 inhabitants and a rapidly ageing population, the mayor, Andreas Hollstein, had a clear idea that to welcome refugees was not only a humanitarian duty but also an opportunity to address local challenges. He decided to convince people to not only welcome the ‘allocated quota’, but to become more committed and host a larger number of newcomers in an active way. To this end, local authorities carried out a campaign that emphasised that migrant integration was a key priority and an opportunity for the city’s economic and societal development Actions included public speeches, interviews, meetings and even phone calls. Coordination meetings were organised between the city and external stakeholders to guarantee the success of the support that people with a migrant background receive from the first moment that they arrive in the city.

Housing was decentralised, given that the city could make available a large number of vacant houses at low prices. This helped revitalise areas of the city where some sectors, such as local shops were losing labour force, while also helping avoid segregation and ensuring that, thanks to a network of volunteers, newcomers and the native population were sharing the same spaces and becoming part of the city identity as well.

Therefore, some of the similar recommendations emanating from those different studies are the need for vertical cooperation among the different decision-making levels (national, regional and local) as well as horizontal cooperation between such decision-making levels and all their stakeholders (civil society organisations, NGOs, migrant associations, universities and the private sector). Such cooperation guarantees that the design of policies and related initiatives are in line with the actual needs of each territory and its population.

Creating common spaces to meet and interact, being patient for the social capital to flourish and linking the new social capital generated thanks to the successful integration of newcomers with the strategy of the development of the area could also bring great benefits to other cities in Europe. 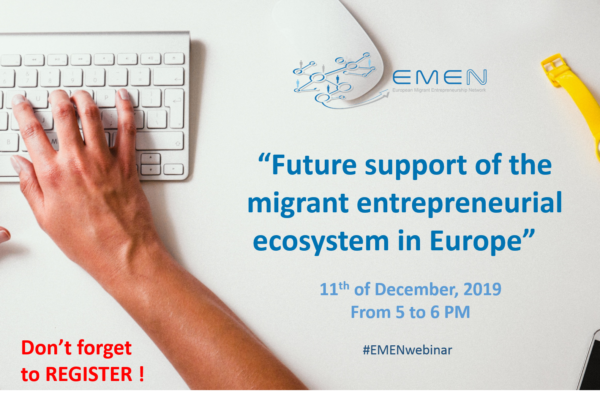 “Future support of the migrant entrepreneurial ecosystem in Europe”: join us for the last #EMENwebinar !

The third EMEN webinar is next week!

The second EMEN webinar is approaching!