E.M.E.N > News > The essence of migrant entrepreneurship and business associations: the third webinar of the #UnlockingDiversity series!

The essence of migrant entrepreneurship and business associations: the third webinar of the #UnlockingDiversity series!

Join us for the third online event of the Unlocking Diversity series: “The essence of migrant entrepreneurship and business associations”

In our globalised times of constant changes, diversity has become a fact of life in Europe.

It is sufficient to wander around a European city to see how our societies are more diverse than they have ever been. This diversity – or, in some cases, even “super-diversity” – has brought about a long list of benefits: it fostered the development of new businesses, contributed to establishing new cultural manifestations and even helped with the renewal of entire neighbourhoods in cities. The benefits of integrating diversity have proven to be considered according to extensive research, which has shown that diverse communities, organizations and institutions may enjoy a performance advantage.

And yet, in many cases, this benefit is still misunderstood: diversity is more often seen as a problem to solve or as a danger, rather than an opportunity. As a consequence, in many areas, diversity still has an untapped potential, hidden behind a barrier of misunderstanding and mistrust. This situation is not only unfair; it is self-defeating. In a globalised economy in which success often means the ability to innovate and to let knowledge circulate, not being able to integrate diversity risks heavily damaging the long-term economic well-being of Europe and its ambition to remain one of the biggest and most performing economies in the world.

It is therefore in the best EU’s interest to recognize the value of diversity and learn to manage it correctly, for the benefit of all!

David Halabisky is an economist working on SME research and policy, focusing on high growth firms. He holds a BA at the University of British Columbia and a MA at the McMaster University. Since 2011 he covers a position as an economist at the OECD, working on inclusive entrepreneurship and the development of entrepreneurship skills. He is the author of many OECD books and reports, including The Missing Entrepreneurs series of books and the recently published book Inclusive Business Creation.

Professor Monder Ram OBE is the Director of Centre for Research in Ethnic Minority Entrepreneurship (CREME), based in Aston Business School, Aston University.

Monder is responsible for initiating the annual Ethnic Minority Business Conference in 1998, which has developed into the most important event in the calendar for disseminating policy and research on ethnic minority firms. Monder also holds the positions of Visiting Fellow at the Industrial Relations Research Unit at Warwick University, and Visitng Professesor at the University of Turku in Finland. He was named as one of the country’s most influential Asians by the Institute of Asian Professionals and was awarded an OBE in the 2004 New Year Honours List for his services to black and ethnic minority businesses.

Arnaldo Abruzzini has been the CEO of EUROCHAMBRES, the Association of European Chambers of Commerce and Industry, since 1999. He is a senior lobbyist in Brussels and represents the voice of over 20 million companies through members in 43 countries and a network of 1.700 regional and local Chambers. He is also an active entrepreneur, having founded several companies. He still owns shares in telecommunications (Interactive Media), energy (InRes) and business consulting (Consir) firms. Mr Abruzzini has worked as Managing Director of several companies active in telecommunications (EPTA), marketing and communications (MediaCamere) and business advice (CoFiCom) in Italy and USA. He has also served in the financial sector, notably in investment banking (MedioBanca) and insurance companies (Bavaria).

Adem Kumcu is President of UNITEE since 2011, Adem Kumcu is a founding member of the New European Business Confederation advocating the interests of entrepreneurs and business professionals with a migrant background at the European level.

He is the founder of Brussels Business Garden consultancy specialized in entrepreneurship, sustainable growth, finance and high-tech.

He has worked for various Commissions of the Dutch Ministries of Foreign Affairs, Education, Culture and Science, and Economic Affairs between 2000 and 2006 and he was a Member of the Board of Advisors of The Oranje Foundation from 2008 until 2010.

Before becoming part of UNITEE, Adem Kumcu worked as Program Manager for Diversity and Integration Policy at the Municipality of Utrecht (2007-2010) and as Strategic Advisor of the Executive Board of Utrecht University (2004-2007). He was Urban Economist for WIBW (2003-2004) and Scientific Researcher at the Institute for Migration and Ethnic Studies of the University of Amsterdam (2002-2003).

Watch the previous webinar, “Resilience of diverse cities and communities in times of crisis”, by clicking HERE! 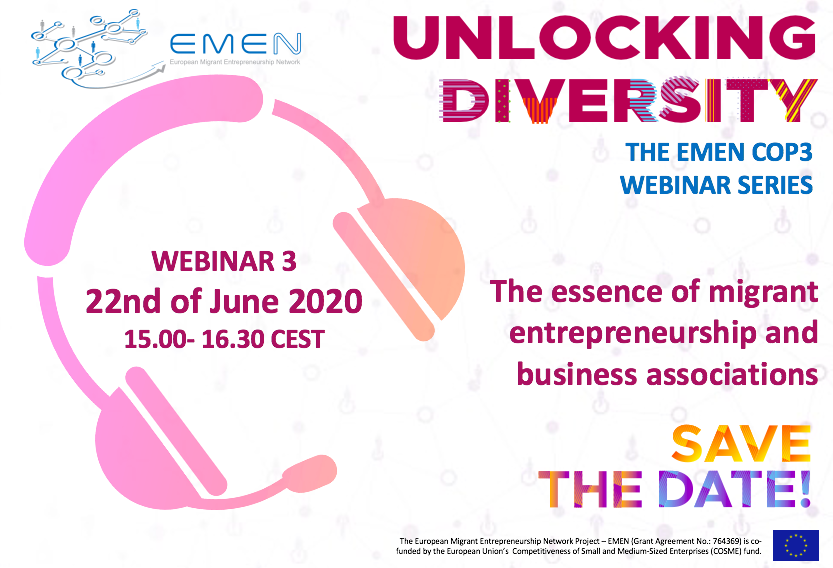