E.M.E.N > News > Migrants are good entrepreneurs – and not only grocers (Professor A. Kritikos)

Migrants are good entrepreneurs – and not only grocers (Professor A. Kritikos)

Are migrant businesses nothing but greengrocers? Professor Alexander Kritikos of the Deutsches Institut für Wirtschafts­forschung (DIW) disposed of this myth at EMEN’s first annual conference in Munich on 23-24 April 2018. He pinpointed the massive contribution migrants make to new business creations in Germany. They are rarely acknowledged for what they do.

Professor Kritikos started by noting that migration happens in waves, and we are currently in the middle of such a wave. Since 2012, 400,000 people have migrated to Germany from EU member countries alone, in addition to the huge migration wave of refugees since 2015. Before 2015, migrants mainly came from Eastern and Southern Europe, but in the future, migration is likely to be predominantly from Africa, driven by climate change. We need to be better prepared to manage these migration flows than in the past.

It is important not to lump all migrants together. Essentially they are of three types: refugees, economic migrants, and investors and innovators. An example of the latter category is Kadir Nurman, who invented the döner kebab, a meal which now supports 60,000 jobs in Germany or more recently Hakan Koç (Auto1) who invented one of the first “unicorns” in Germany. Others are famous worldwide: think only of Sergey Brin (Google) and Arianna Stassinopoulou (Huffington).

For Europe, migrants are an important source of business ideas and energy. Between 2007 and 2016 in Germany, entrepreneurship overall fell by 53%, whereas migrant entrepreneurship fell by only 9%, after having grown by 28% between 2007 and 2011. An especially strong increase in start-up behaviour was seen in the construction sector, where 75% of all start-ups are launched by migrants, most of them probably being solo self-employed people circumventing the labour market restrictions which prevented them in the recent past from becoming employees (in greengrocery the figure is 26%). More importantly, migrant entrepreneurs (who are overwhelmingly male) are found in all sectors. Their main countries of origin are Poland, then Romania, Turkey, Bulgaria, Italy and Croatia if they are coming from an EU country. It is important to say that these are not just street-corner grocers: the share among these start-ups that have innovation potential is identical to that for native business founders. The average level of employment in migrant businesses is only slightly lower than in native businesses.

However most immigrants to Germany tend not to take advantage of the business support that is on offer. Germany’s Start-Up Strategy worked well, but the take-up of coaching was low, at around 10%. This is a pity as training in entrepreneurship may boost productivity.

Germany has the second-highest number of immigrants, after the USA, but it has more trouble in attracting the top brains. Therefore, on the one hand, Germany needs to make itself more attractive to innovators. On the other hand, since most refugees, but also some migrants, are here temporarily, self-employment is one effective solution to improving their income situation. For them, financial support (for instance start-up benefits) in combination with coaching, reduces entry barriers and may be beneficial. But in Germany (and maybe also in other European countries), it is also important to tell more stories about successful migrant entrepreneurs to get away from the negative connotation that migrants mainly open greengrocery stores which produce only low value added. 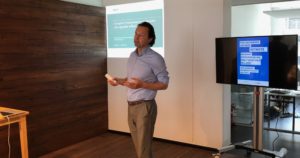